How Old is Your Audience? Finding Ways to Reach Younger Generations

It’s a typical Friday evening in my friend’s dorm room, Camila Cabello playing in the background, as we contemplate whether to go out or dub it another girls night in. My hand grasps the community theater pamphlet listing the current season. Odds are, unless we’re talking Book of Mormon, my peers will not be interested. So instead I find myself going solo and settling into a seat amidst a sea of Baby Boomers.

My dorm is not an anomaly; in past years, theaters across the nation noticed a decline in audience attendance by young people up until 2015. In 2017, there was a sudden surge in interest among Millenials for the arts. While this is a positive change, it is important to strengthen the upward trend and engage kids in this vibrant form of culture. Serving as an outlet for creativity, self-expression, social commentary, and entertainment, the theater is irreplaceable. 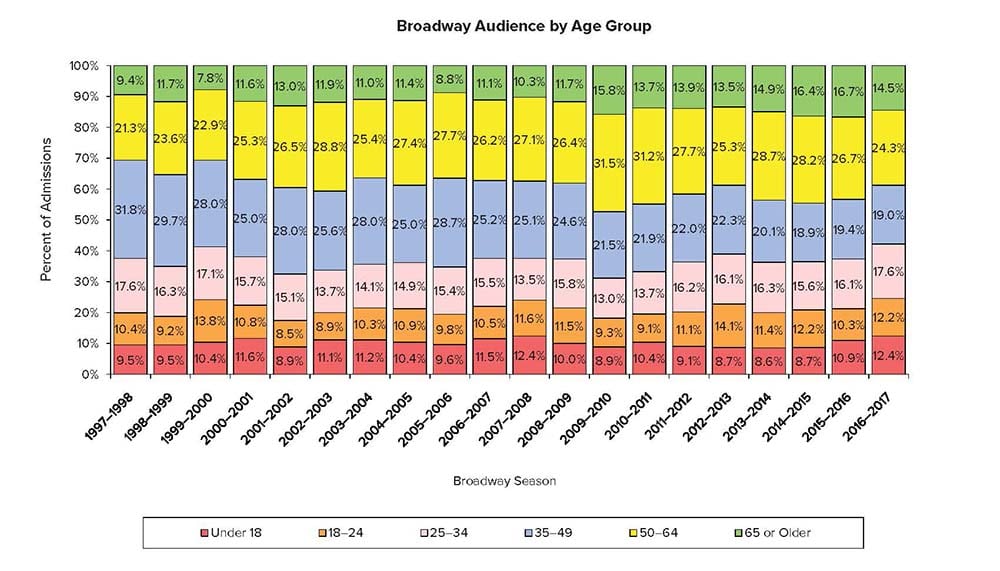 The Broadway League Report shows 42% of audience members were younger than 35, a 14% increase from the previous season.

If you hope to maintain interest in the arts generationally – or have not yet experienced this demographic shift in your patrons- here are three strategies to engage with younger audiences:

Weekend outings revolve around the family calendar, so it is important to make theater accessible to the entire family. Don’t underestimate the power of a matinee. Yes, there is a special excitement that comes with an evening performance, but this keeps the little ones with bedtimes from experiencing the magic of theater. In addition, expand season tickets and memberships to be applicable for more than just parents, include the family! By making the effort to include minors, you not only enrich the childhoods of the younger generation, you help instill their value of the arts for a lifetime.

Occasionally referred to as “Generation Debt,” expensive ticket prices usually don’t make the cut for our budgets. The arts are often considered a luxury for those of us battling college loans. Before opening in 2015, the producers of Hamilton partnered with the Rockefeller Foundation to finance 20,000 local public school students to see the show for $10, a program that has since expanded to sponsor many more teenagers. In addition, a lottery is held for the current Hamilton tour, making it affordable to those who would not otherwise afford to go. While most theater companies aren’t privileged with this financial flexibility, it is important to acknowledge the financial obstacle that might be preventing young people from becoming a part of your audience.

Plays as old as Sophocles’ Oedipus Rex contain messages and lessons that can still be applied to current times. To catch the attention of younger patrons for these types of classic productions, use words and phrases in your advertising that young people can relate to. The National Arts Marketing Project promotes Generational Marketing as a way to connect with audiences by using shared economic, technological, and social experiences unique to each generation. So take a step back, put the modern themes of your production in your advertising. Make a connection and incite curiosity with young people. Will they get #FOMO if they miss out on your show?

Theater has the unique ability to provide a stage for the classics, enriches modern controversies, and provokes the imagination. Live performances produce a wonder in audiences that cannot be duplicated with a recording. While young audience members may be attending less frequently, recent trends indicate a favorable shift. Take this opportunity to find new ways of further engaging youth in a timeless tradition.