Why Social Media Advertising is a Smart Play for Arts Marketers

At the end of June, Facebook announced that they had hit 2 billion monthly active users. Since the social media site, which was founded 13 years ago, hit 1 billion monthly active users in 2012, the number of people using the site appears to be growing at an astronomical rate. Youtube is not far behind at 1.5 billion monthly active viewers/creators and Instagram at 700 million. Not only is the number of people using social media growing rapidly, but the frequency that the users visit the sites is growing as well. According to TechCrunch, 66 percent of Facebook’s monthly users return each day now compared to 55 percent when it hit 1 billion.

Social media presents a huge opportunity for arts marketers to reach their patrons online with ads and organic content, and based on research conducted by eMarketer, the ads appear to be working for businesses. According to eMarketer, over two-thirds (67%) of US marketers surveyed currently run video ads on Facebook, and over half (51%) do so on YouTube. Of those marketers surveyed, 83% of respondents were confident that Facebook video ads were driving purchases and 79% were confident that YouTube video ads were driving purchases.

Since the audience sizes of social media sites are now so massive (2 billion is over a quarter of the world’s population!), social media provides a great space for arts marketers to make their organization’s brand more relatable, interact with their patrons, and promote upcoming shows, ticket sales, or membership. According to SproutSocial, 62% of people said they are likely or somewhat likely to purchase a product from a brand they follow on social media.

While there are some behaviors conducted by brands on social media that consumers  find annoying that may deter them from making purchases, such as using GIFs (42% of people surveyed found it annoying) or discussing politics (71% of people surveyed found it annoying), there are many behaviors that consumers did approve of and respond to. 83% of internet users enjoy when brands use video clips (this is a great way for arts organizations to showcase their work!), and 83% like it when brands responded to their questions through social media. Overall, 71% of people said that they are more likely to purchase a product from a company if they had a positive experience with them on social media (SproutSocial). 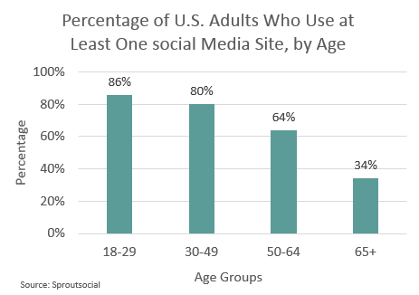 There is often an assumption that only younger people are using social media sites, hindering your ability to market to both your younger and older demographics. This is not the case. While it is true that Millennials are more likely to use social media, a surprising number of Baby Boomers are also constantly checking their social media feeds. A study conducted in North America and the UK by Qualtrics and Accel in late 2016 found that 42% of Millennial respondents (ages 18-34), 26% of Gen Xer respondents (ages 34-54), and 29% of Baby Boomer respondents (ages 55+) said they can’t go over five hours without checking their social media feeds. This information is only valuable if we understand how these generations are interacting with brands on social media and how this allows us to effectively advertise to them.

The following statistics are from Sprout Social’s Index Report and were drawn from a social media usage survey of 1,000 respondents of varying ages conducted by Survata between January 24, 2017 and January 30, 2017¹. 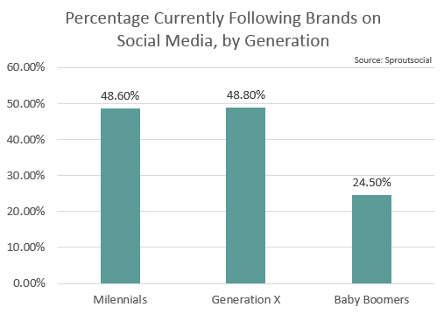 As the number of social media users continues to grow astronomically, the potential audience size for arts marketers also continues to grow. The way brands reach customers is continuing to evolve as more people of all ages, around the world warm up to the idea of using social media and engaging with brands online.

¹. “The Sprout Social Index is a report compiled and released by Sprout Social. All referenced data is based on 280,000 public social profiles (135,000 Facebook; 114,000 Twitter; 31,000 Instagram) of continually active accounts between Q4 2015 and Q4 2016. More than 3.8 billion messages sent and received during that time were analyzed for the purposes of this report. The consumer survey was conducted by Survata, an independent research firm in San Francisco. Survata interviewed 1000 online respondents between January 24, 2017 and January 30, 2017. Respondents were reached across the Survata publisher network, where they take a survey to unlock premium content like articles and ebooks. Respondents received no cash compensation for their participation. More information on Survata’s methodology can be found at survata.com/methodology.”